According to the U.S. Environmental Protection Agency (EPA), fluoride compounds are salts that form when the element combines with minerals in soil or rocks [1]. The adult body contains less than one-tenth of one ounce (about 2.5 g) of fluoride. About 95% of the fluoride in the body is found in the bones and teeth [2]. An adequate amount of fluoride is important for the development of strong teeth and bones. As acid slowly penetrates through a tooth’s protective coating enamel, it allows harmful bacteria to grow and thrive, causing cavities. Fluoride helps to resist the acid and protects teeth against cavities [2, 3]. In addition, fluoride can prevent mineral loss in bones and helps bones to retain minerals more effectively [2].

It is very important to note that having an excessive amount of fluoride in the body can have adverse effects. According to The National Academies of Science (NAS) review in 2006, too much fluoride may lead to dental fluorosis or mottling of the teeth, especially in children. Also, too much fluoride may result in join stiffness and pain or lead to bone fracture [4]. Young children and people who are prone to accumulate fluoride into their bones should especially be careful with their fluoride intake and consult with a dentist or doctor. 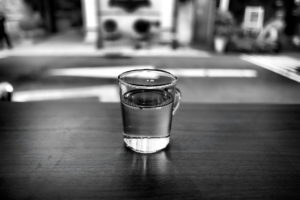 Fluoride is found naturally in seawater, well water, and a few types of food. Tea and ocean fish are examples of natural items that have fluoride content. In addition, fluoride can be commercially added to many food items and beverages, and is often added to drinking water.

In the United States, fluoridate is commercially added to the more than 70% of the public water supply in the amount of 0.7 to 1.2 mg per liter [4, 5]. In January 2011, the U.S. Department of Health and Human Services (HHS) and the U.S. Environmental Protection Agency (EPA) proposed changing the current range with the new recommendation of 0.7 mg per liter of water [6]. This means that when drinking 1,000 cc of home tap water water daily, we will receive 0.7 mg. The new recommendation was based on the NAS review and scientific assessments intended to balance the benefits of preventing tooth decay while limiting any unwanted health effects. In 1997, the Food and Nutrition Board (FNB) of the Institute of Medicine set adequate fluoride intake for healthy adults at 4 mg per liter for males and 3 mg per liter for females [7]. 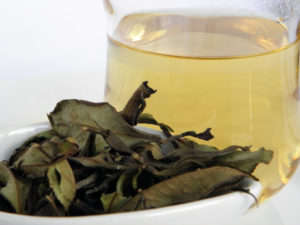 Fluoride is natural compound found in tea leaves. Usually, older tea leaves contain higher levels of fluoride, while the buds and young leaves have less fluoride. Pu-erh tea is made from old tea leaves and contains large amounts of fluoride. The three most popluar teas, green, oolong and black, generally contain moderate quantities of fluoride. The Linus Pauling Institute at Oregon State University provides general guidelines for the fluoride content of brewed tea, shown in the table below [8]. For example, an 8-oz cup of green tea, oolong tea, and black tea may contain 0.3-0.4 mg, 0.1-0.2 mg, and 0.2-0.5 mg of fluoride, respectively. Every day, three to four cups of these teas provide a desirable and adequate amount of fluoride for healthy adults.

People with concerns about fluoride intake should consult with their dentists and doctors.